If you are looking for a comedian for fund raiser or similar event – Rik Roberts can provide the laughs. Rik’s focus is clean, wholesome and family-friendly entertainment. You won’t have to worry about anyone bring offended with Rik. The comedy still has a sharp edge. It’s as fresh as today’s newspaper. He just prefers to poke fun of himself instead of singling anyone out and making them the butt of a joke. Ri’s comedy show is titled “It’s Funny Now“.

Most comedians are willing to get a laugh at all costs. Rik loves to laugh, but he won’t cost you your job in the process! When you hire a comedian for fund raiser events you want someone who can unite the audience. You want someone with experience. And you want someone who puts your goals ahead of their own. With Rik Roberts, you get all of those things. You also gets an audience that will come back year after year to have that great feeling again and again.

“Thanks again for providing a fantastic night of comedy and fun for our event! I thought the night was a huge success and the best one yet! Thanks for your support!” 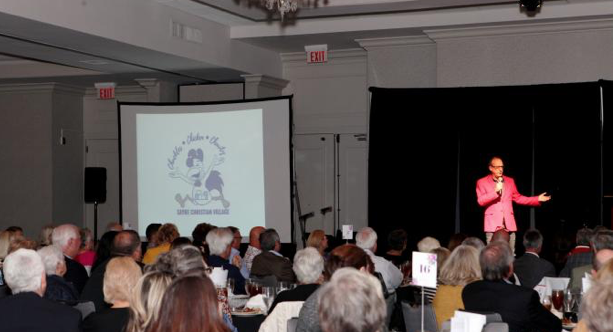 Rik Roberts is a popular Comedian for Fund Raiser events.

Sayre Christian Village holds the “Chuckles, Chicken and Charity” event in Lexington, KY each year. The night is a lot of fun and raises money at the same time. And – who doesn’t love chicken? Although we have yet to settle on the answer to the old question “Which came first – the chicken or the egg?” we do know why the chicken crossed the road. He wanted to get to the Chuckles Chicken and Charity fund raiser before got fried. Won’t you consider joining us next year? You will be glad you did!

To schedule a call with Rik Roberts and hiring a comedian for fund raiser event, simply send an email to: rik@rikroberts.com .